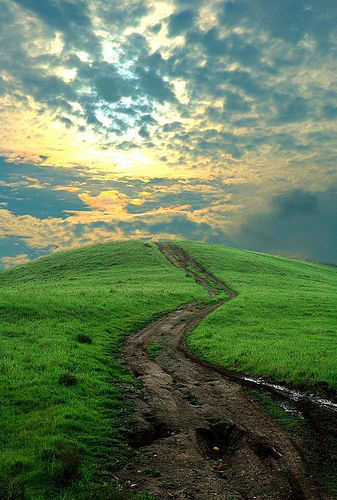 Following the God of the Path

I recently spoke to a 20-something intellectual with a Masters in Biology about his religious backround.  "I'm an atheist," he told me.  "I was kind of raised nominal Buddhism but mostly nothing.  And, being a scientist, its hard for me to believe in something I can't have real proof for."

"So, you don't believe God exists?" I asked.

Hmmmm.. Contradictory??  God doesn't exist... but, on the other hand, He has guided me.   As I've pondered this I've come to think he's actually in good company with others, many others, especially in the younger generations.  Though many reject the religious "god" or "gods"  from their past as false or non-existent, they sense the reality of a "God of the Path."  This "God" leads them, guides them, guards them, opens doors and sometimes shuts them.   He has a plan for their life that He  isn't always silent or subtle.

Honestly, in the midst of the mess of my own discontent and experience or religious mumbo -jumbo, I periodically get quiet enough to ask myself, "Jeff, Why do you still believe in God?"   What usually pops into my mind isn't some kind of Thomas Aquinas logical proof or pat "Just believe!" Sunday School answer.  Instead, I come back to the myriad of times when I've experienced, sensed or seen God guiding me along the path.  I actually have a pretty long list!  My wife, Mindy, laughs when she says, "You've certainly had more of those appearances than most !" "Yeah, I think I've needed them more!"  I tell her.   She doesn't disagree.

One example: Last summer, I came to crossroads decision where I not only thought long and hard, but eventually traced out the alternatives on paper and worked out a numeric system with pros and cons.   I was still torn!  After sharing my whole complex process with Mindy, I grabbed a yellow highlighter and highlighted the option that numerically "won."  So, Decision made?  No, within minutes, seconds even, I was back to second-guessing and filled with anxious uncertainty.  That evening, we attended a dinner party at a friend's house where I was introduced to a middle-aged man.   Knowing nothing about me, after just a few minutes of  small talk conversation, this spiritual man looked at me intensely and said, "I feel like I'm supposed to tell you this.  You are at a crossroads right now.  It's OK. God knows where you are and He has lit up your path. You just need to follow the path He's highlighted."    Gulp... The the picture of the yellow highlighter popped into  my mind.  (This wasn't what I was expecting!!!!)  I looked to the room nearby and realized Mindy might have overheard the conversation.  "Mindy did you hear what he just said?" I asked.  "Yes." she responded.  "Well, what does it make you think?"  "Well, duh!" she said.  (Sometimes she just has a way with words!) "What do you mean?" I still questioned. "Jeff, what did you just highlight this morning?"

Hokus pokus?  Weird?  Bizarre even?  Sure, sometimes truth is stranger than fiction in my life.   And trust me, I have more of those kinds of stories!   Yet, as I coach others at a crossroads in calling, career, or just plain life,   they often share their own "unexplainable" experiences with the "God of the Path."   It seems so atypical yet as I read the Bible   discover that God very much is said to "directs paths."   He "leads beside quiet waters."  (Psalm 23:2).   He tells worried wanderers, "When you walk through the fire, you will not be burned."  (Isaiah 43:2)    He  "teaches you what is best for you, (He) directs you in the way you should go."  (Isaiah 58:17)   And as written in the Psalms, King David's anxiety melts when he affirms, "The Lord will fulfill his purpose for me"  (Psalm 138:8).

No, I haven't discarded numeric decision-making, but I have seen faith created by the  "God of the Path" who sheds light upon the journey and reveals doors I  could never have imagined.    So, do follow that God of the Path.   Don't miss that adventure!    Don't dare miss THAT adventure!