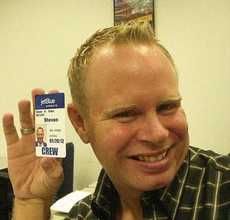 Freeing the Steven Slater in Our Souls

You know it's gonna make an awesome movie!   Fed up, overworked and underappreciated employee finally snaps.  Instead of calmly turning in his two-week notice, he grabs the plane's address system, crudely cusses out the obnoxious passenger, then, realizing his "career" is history, grabs a couple of beers, pops the inflatable emergency evacuation slide and slides away to freedom.   A few hours later, he's surrounded by countless government gunslingers in his New York Apartment, handcuffed and taken off to jail.  The next day, America's internet viral sensation comes to the working-stiff's rescue.   Headlines declare him "Working Class Hero."  "Folk Hero."  "Global Sensation."  One headline reads, "He Lived Our Dreams."

Once just another hard-working guy, Steven Slater has just "fired himself" and been promoted to global celebrity.   If you're a beer company advertising exec right  now, you're hoping, "Please be our beer!  Please be our beer!"

Steven Slater is the Little Orphan Annie of our day.  One man represents the rootless and soul-sucked masses of American workers.  It's the masses involved in the statistic that came out in December of 2009 reporting that 60% of workers would gladly leave their jobs as soon as the recession ends (whenever that officially happens).   It's all those who secretly say to themselves: "Take this job and shove it,"  but don't, one guy's chutzpah represent this secret ambition trapped in our souls.   One person interviewed said, "It's no wonder that Slater's 'Take this job and shove it' is so alluring.  We're all exhausted by this recession."

OK, so can we now just admit: Houston we have a problem!  Yes, of course some jobs just stink and they always will.  Yes, recessions stink.  But, doesn't the instant outcry and "cult hero status" demonstrate that employees are feeling dissatisfied, stuck and sucked dry?   Doesn't it mean that leaders of companies and organizations can't keep ignoring a workforce that feels overworked, underappreciated and on the verge of "Slatering" (you know it has to become an adjective!!) or even worse?

Of course, we can just laugh this one off and ignore the signs of decreasing economic competitiveness, increasing depression rates or even coming worker rebellion.  But wouldn't you agree that something's gotta give?   And truth is: its time for it to give!

If you're a dissatisfied worker - what are you doing to free the "Steven Slater" stuck  in your soul?   Who are you talking to?  Who's helping you either change your mindset or make a change?

Of course the movie and the beer commercial are bound to be a hit.  But, the time has come to proactively address this epidemic worker dissatisfaction positively.  Do you agree?