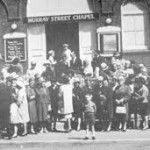 It's not hard for many of us who grew up Plymouth Brethren (or in most church groups for that matter!) to find grievances.  There are even blogs now out there for "Plymouth Brethren in recovery."  I could certainly add a post or two to their site. (and very sadly I think the Brethren's view of women has really curtailed them, not to mention the women.  : (

However, being somewhat in touch with some of the others I grew up with at Central Bible Chapel in Palisades Park, New Jersey, I can't help but notice something notable: The Plymouth Brethren sure DID develop a lot of leader types!

The Plymouth Brethren seem to have created transformational and world influencing leaders and spiritual influencers that FAR exceeds their size.

In stalking some of their Facebook Pages, or periodically running into people and hearing, "You grew up Brethren too!" it's hard to not be impressed with who these people are and what they have accomplished.

Of my personal connections from this "assembly" in a blue-collar town, it was clear that many

2. Many were in high level positions as doctors, business leaders, government leaders and ministry leaders or owned their own business.

3. Almost all appeared to be involved in Christian leadership in their churches, non-profits or philanthropy.

4. All, as far as I could tell,  seemed now to have stable, healthy and successful families and marriages.

There are many, many other leaders with names that may not be as quickly recognizable in areas of chemistry, marine biology, painters, poets, song-writers etc.. (And a few famous serial killers thrown in.  Not sure what's up with that!)

So, again, there are things and beliefs that the Plymouth Brethren failed in.  (including their ongoing controversy between "Open" and "Closed" AND there are those who were wronged from some beliefs... particularly women with leadership gifts.... not to mention the typical "religious" stuff that does damage.

However, if today's Church wants to be about creating transformational leaders who change the world, there are some very significant things that can be learned from the Plymouth Brethren.

There was no clergy laity split or hierarchy. The ministry belongs to all who follow Jesus, not to a special class of people.  Implications: you have a role to play in building God's work in the world, no matter what gift you had.  What's your role? Find it!

2. They created gatherings where anyone (well, men at least) were encouraged to participate.

Many were given a chance to participate, share, even teach.  The mindset: we need you to participate!  You have a gift that we all need.

Therefore, the level of scholarly Bible study, public speaking abilities and example from all was elevated.  Being a passive "attender" or "going to church" as a "service" was not part of the culture.  You needed to be educated!

And, even more than some kind of classroom training, there's no better training than opportunity to do and experience.  Learn by doing!

3. They believed that older leaders should encourage young leaders to actively participate.

No one person was elevated to speak for God and younger leaders were always being developed to be able to speak, teach or lead. The survival of the fellowship depended on developing leaders RIGHT AT HOME... not outsourcing to some other training.

Teenagers could share and participate with adults and were seen as having something valid that others needed.  "Don't let others look down on you because of you are young" (I Timothy 4:12) was regularly quoted.

4. They saw the "church" as the people, not as the organization, building or professionals in "ministry."

"Church" wasn't there to entertain you or be a "service" for you.  If you were a believer, !  You had a responsibility for it, not some paid person.

5. Older people were respected and seen as wise mentors who ACTIVELY cared about spiritual growth and development of youth.

It still amazes me the interest that the older generation took in my spiritual development.  I knew that some of them prayed for me EVERY SINGLE DAY!  (Mrs. Mortland, Mr. Spellmeyer, my grandmother, Ethel Meroni.)

6. Leaders led out of love and not position or pay.

AND they worked other jobs.  You knew they were people just like you.

All this to say, I very much agree Church really does have an active role to play in developing world-changing leaders... NOT just pastors, paid ministers and volunteers.

What might today's Church learn from and actively DO to build such leaders?

And even might businesses and organizations seeking to develop leaders learn from the Plymouth Brethren?

I think there's something here.  Do you?