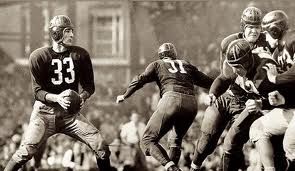 My Largest Life and Career Lessons... From Playing Football

Last night I drove by the Tenafly High School football "stadium" in Tenafly, New Jersey. Even in the dark, the memories flooded back - as did my biggest life lessons from playing football.

I know no one tends to sign up to play to learn humbling - but wonderful - life lessons. Certainly wasn't my intention when I joined the Tigers as a freshman in 1978.

I learned this... albeit the hard way: "It's better to move to a place you're GREAT AT than to stick in a position that you're "OK in." Do it for your team, for yourself and for your future!

My first ever starting QB play was against Fort Lee. I took the snap, faked a pitch - then ran 95 yards for a touchdown. Clearly, I was a quarterback... (I was big time now!!)

HOWEVER - that wasn't the norm from that play on... I went on to have a stunningly mediocre freshman season season... I was "good" - but truthfully, I wasn't great. I was slow to read the defense. I had poor eyesight and tended to be color blind to who I threw the ball to. (Some call this disease "interceptionitis)

Noting a string of interceptions, the "wiseguy" linemen on our team (who called me "Cal" for obvious reasons! I called them "Iggy." "Fief" "Ports," "Luuch" All Jersey boys, right? ) even wrote a song borrowing from theme song of Mahogany sung by Dianna Ross:

It wasn't until my junior year (after more mediocre seasons) that my coach became frank and honest with me, "Cal, you're doing OK at quarterback - but I believe you could really help us as a receiver. We need your help in that area. Would you be willing to try jumping in at receiver for a game or two?"

My first thoughts: "NO WAY COACH! How could I possibly?? I'm destined to play quarterback! Don't you know my last name? And I'm tall, fast and have QB emblazoned on my letter jacket!?"

But, "OK coach, I'll do it." I gulped. (hoping I wouldn't ruin our family name and that Coach would quickly repent for his error in judgement)

....... Incredibly - it worked! From the start, I LOVED playing receiver! It was fun! I was good at it! (At least better than I was at QB!) We started winning games!

Daryl Henderson stepped up to become one of Tenafly's best quarterbacks ever... our team went on to have a record season, making it to the state championship. We recorded one of the top amounts of offense in the state.

Having grown up as the "target" for two natural QB's I could catch a football since my life depended on it!

LIFE LESSONS: (mine.. but sharing in case this helps you! OK?)